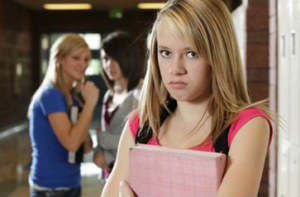 Bullying is an act of intimidating another person physically, verbally and emotionally, or bothering someone to a great extent. It is a way to control another person’s behavior and reveal power to others. Bullying is a problem which is not just confined to high school walls, but it is also practiced in workplaces. Some people often do not take bullying as something very serious because they think that bullying is a part of life. They fail to see the negative aspects of such behavior and what it can lead to in the future. Bullying behavior is not a strength of a person, but it indeed is a weakness. People who are insecure, and want to be recognized as strong and successful individuals, resort to such tactics. They believe that by displaying such behavior to others they can get recognition and respect from peers and other classmates. In reality, bullying is an act of a coward who uses it as a shield to protect his self-esteem and ego. Bullying behavior in high school can cause problems for those students who are often victimized.

How Bullying Behavior can Cause Problems?

Bullies often victimize those high school students who seem weak and passive. They are easy prey because they do not pose any danger. Bullies recognize their behavior and know that they cannot retaliate. Bullying can take place in a form of physical abuse as well as verbal and emotional abuse. It is repeatedly done and it shatters the victim’s self-confidence and self-esteem. If one person is constantly told that he is incompetent, worthless and not good enough to keep up with the society, in general, a time will come when he will actually believe it. It can lead to serious mental health problems like severe depression, anxiety to socialize, withdrawal from normal activities, avoidance from school because of fear and other serious problems. It can affect a student’s academic performance and he may stop taking a keen interest in his studies. Students who are always victimized gradually develop a fear of people. They stop trusting other people and start believing that this world has very few good people.

How Bullying can be controlled?

A school is a place to learn and grow and not a place to listen to tantrums of bullies. It is the responsibility of school administration to make sure that a safe learning environment is provided to all the students where they can study and excel. There must be severe penalties in place to stop some students to use bullying is a tool to harm others.