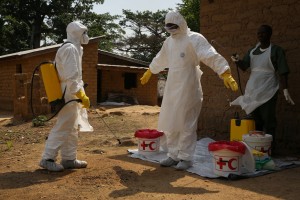 Ebola virus disease is a deadly disease that has affected thousands of people in West Africa. It has killed more than 5,000 people in Western Africa and around 9,000 people have contracted the virus. Ebola is a deadly virus and it is contagious. It can transmit from one person to another through coming in contact with bodily fluids of the infected person. It is not airborne, but experts fear that if it can evolve into an airborne virus, the more chance it gets to mutate transmitting from one person to another. The scariest thing about Ebola virus disease is that it has no cure, there is no vaccination to stop this virus from spreading and especially in the Western Africa. People there are more vulnerable because of poor healthcare facilities. Ebola virus disease is a kind of a disease that can be treated if diagnosed earlier. Normally it takes between 2 to 22 two days to incubate inside the human body. If a person has Ebola virus but does not show any symptoms, then he is likely to infect other people coming in direct contact with him. However, safety measures are of utmost importance when handling and treating infected persons.

Healthcare workers including nurses are at highest risk of contracting the virus. They have to take severe safety measures such as covering their entire body with special clothing and using disinfectants regularly. So far, healthcare workers have been the most vulnerable people contracting the disease even with safety measures because their chances of exposure to the virus are higher than those who are not exposed to infected people. A healthcare worker is required to cover the entire body including eyes, hair, hands and legs. Eyes contain mucus, which can pave the way for the virus to infect a person.

Once the virus activates, after the incubation period, it starts showing the symptoms such as intense weakness, body pain, diarrhea, vomiting, rashes on the body, internal and external bleeding. Treatment includes isolating the person from others and high intake of liquids. There is no vaccination or any other form of effective treatment as such. Experts are testing new vaccines and it may take some time before there is any breakthrough in terms of successfully treating the disease. In most of the cases until date, people have died contracting Ebola virus. The survival rate is minimal until there is an effective vaccine or form of treatment available especially in Western Africa where health care facilities are substandard.